More On: kamala harris ‘A slap in the face’: GOP pols take aim at Harris for absence at border Kamala Harris’ most senseless dodge yet Biden throws his clueless vice president under the bus Psaki says Harris ‘may’ visit border ‘at some point’ after VP laughs off idea Vice President Kamala Harris on Tuesday snapped at an interviewer when he pressed her on why she hasn’t visited the southern border in the 76 days since President Biden put her in charge of the record-smashing illegal immigration crisis — snarking that she hasn’t “been to Europe,” either.

“At some point, you know, we are going to the border,” a defensive Harris told NBC anchor Lester Holt on “Today” in Guatemala on her first international trip since taking office — 1,308 miles away from the southern U.S.-Mexico crossing.

Harris, seeming to laugh at her own joke, responded: “And I haven’t been to Europe.And I mean, I don’t understand the point that you’re making.I’m not discounting the importance of the border.”

Harris’ comments come as Border Patrol continues to be overwhelmed by the crisis, which has seen the largest number of illegal immigrants since 2006 infiltrate the U.S.this fiscal year.

Nearly 900,000 migrants were stopped by Customs and Border Protection from Oct.1 to May 31, according to preliminary data obtained by Axios on Monday.

“I think that at some point she may go to the border.We’ll see,” Psaki said at her daily press briefing.

Later, Psaki added, “If it is constructive and it moves the ball forward for her to visit the border, she certainly may do that.”

Harris drew withering Republican criticism for laughing off the notion of a border visit to Holt.

Rep.Andrew Garbarino (R-NY) wrote, “I have been to the border and it’s nothing to laugh about.Thanks to Biden/Harris policies, officials are stretched thin and both border communities and migrants are suffering.This is not a joke, it’s a crisis on your watch.”

Chanel, 7, and her sister Adriana, 10, both unaccompanied minors traveling alone from Honduras, sit among other asylum-seeking children as they wait to be transported to a US Border Patrol processing facility.REUTERS The issue dogged Harris throughout her mission abroad .On Monday, Harris dismissed a reporter’s question at a press conference in Guatemala regarding why she hasn’t visited the southern border, saying that such a trip would be a mere “grand gesture.”

While on the ground in Mexico City on Tuesday, a reporter asked Harris why, given the proximity, she wouldn’t stop by the border on her way back to Washington.

“I’ve been to the border before.I will go again,” Harris insisted.“But when I’m in Guatemala dealing with root causes, I think we should have a conversation about what’s going on in Guatemala.”

At a Tuesday evening press conference in Mexico City, Harris was asked two more times about when she would visit the border, but avoided setting a date.

“I will and I have before,” Harris said at first, noting that she is from California and brushing past whether she would visit again “soon.” When a different reporter asked “how soon” she would visit the border, Harris talked past the inquiry, saying “the issue of root causes is not going to be solved in one trip that took two days.”

Minors lie inside a pod at the Department of Homeland Security holding facility in Donna, Texas.

AP Harris has faced pressure for months to visit the border.Two days before she was named as Biden’s migration czar in March, she laughed on an airport runway and said “not today!” when asked if she would visit the border.

The White House has tried to clarify that her role is limited to addressing the “root causes” of migration from the three-country Northern Triangle of Central America, which includes El Salvador, Honduras and Guatemala.The three countries are home to the majority of unaccompanied minors and families surging to the border this year.

Still it is the surge from those countries at the border — and her unwillingness to see the effects of it firsthand — that has drawn sharp criticism.

Indeed, Harris said in her prepared comments in Mexico City something that US residents living along the southern border would argue should apply to them and not just the Central Americans.

AOC blasts Kamala Harris for telling illegal immigrants to ‘not come’ The Biden administration’s undoing of former President Trump’s border policies…“I also believe that if you want to fix a problem, you have to go to where the problem exists.

If you want to address the needs of a people, you must meet those people.You must spend time with those people,” said Harris.

“Because the only way we can actually fix the problem is to understand the problem.”

Harris’ trip to the region got off to a difficult start when Guatemalan President Alejandro Giammattei blamed the Biden administration for the migrant crisis in a Sunday interview, saying US officials sent mixed messages.

Harris was then greeted at Guatemala’s presidential palace by pro-Donald Trump protesters who brandished signs that said “Trump won” and “Go home.”

Critics attribute the border surge to Biden’s policies, including his decision to end Trump’s “Remain in Mexico” policy that required most asylum-seekers from Central America to remain in Mexico while US courts reviewed their claims of persecution.

Biden also ended construction of Trump’s US-Mexico border wall and urged Congress to pass legislation that would establish a path to citizenship for most illegal immigrants.Republicans said the legislation and Biden’s policy changes created new “pull” factors for illegal immigration.

The number of US-Mexico border detentions soared to a 21-year monthly high of more than 178,000 in April, the most recent month for which official statistics are available.

Dozens of asylum-seeking migrants from Romania, Armenia and Central America, including a group of unaccompanied minors, wait to be transported to a US Border Patrol processing facility.REUTERS. 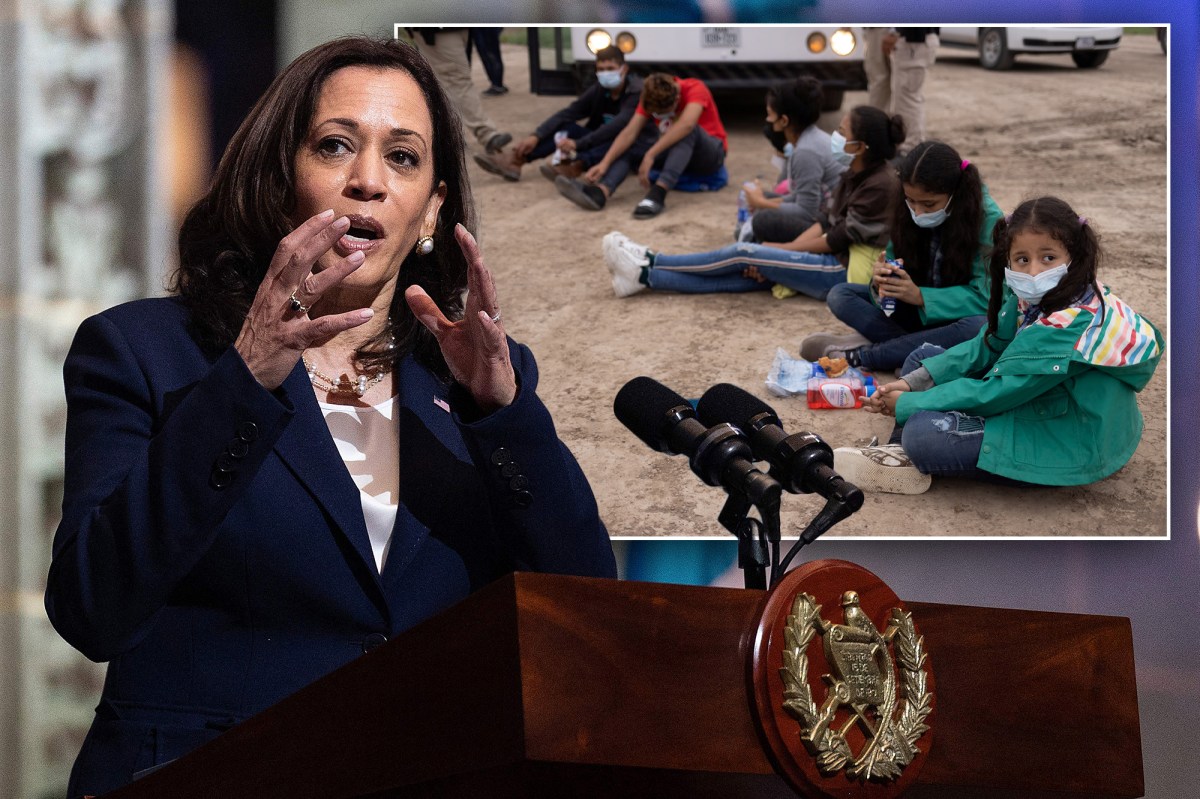