Former President Donald Trump ranted on a Mar-a-Lago bandstand on Thursday that Arizona will be the first state to undo the ‘rigged’ 2020 election after a recount in Maricopa County conducted by the Florida company Cyber Ninjas continues.During the speech, Trump repeated false claims that the election was ‘rigged’ and allegations that he only lost to Joe Biden because of widespread election fraud – though no evidence has ever been publicly provided.In other videos posted from the same speech, Trump tells his fans that he would be leaving the Mar-a-Lago club for the Summer – and plans to return in October.Insider reported that he will be moving to his golf resort in Bedminster, New Jersey for the summer.’Let’s see what they find.I wouldn’t be surprised if they found thousands and thousands and thousands of votes,’ Trump says in the videos, which were taken during an event to endorse Rep.Billy Long.

‘We’re going to watch that very quickly and, after that, we’ll Pennsylvania, we’ll watch Georgia, and you’re going to watch Michigan, and Wisconsin, and New Hampshire.’ He continued: ‘This was a rigged election and everybody knows it and we’re going to be watching it very closely.’ Scroll down for video Trump also claimed in the speech that ‘they found a lot of votes in New Hampshire just now’ – though it was not immediately clear to what he was referring.In April, New Hampshire Gov.Chris Sununu signed a bill authorizing an audit of how votes were conducted in Windham pertaining to four seats in the state’s House of Representatives.Arizona’s recount started last Friday after the state’s Republican-led Senate hired a Florida company to conduct the audit.Doug Logan, the CEO of Cyber Ninjas, is overseeing the audit despite the company having no experience working elections.Forbes revealed that Logan has spread outrageous conspiracy theories that a company tied to Hugo Chavez, the long-dead Venezuelan dictator, rigged voting machines against Trump.The audit, which is expected to conclude May 14, is only looking at votes cast in the presidential and U.S.

Senate races, which were won by Democrats.

Anthony Kern, a former member of the Arizona House of Representatives who lost his seat in the election, was pictured by the Arizona Republic taking part in the recount.The reporter who took the photo was then escorted out of the facility and told his press credentials were revoked for taking the photo, the outlet reported.Kern was also pictured among a crowd of rioters during the January 6 siege at the U.S.Capitol building and was a vocal advocate for the ‘Stop the Steal’ movement raising concerns about the validity of the recount, Newsweek reported.The former state congressman is also a disgraced police officer who has been placed on the state’s list of cops with credibility issues, known as the Brady list, according to Daily Beast.’Wife and I are honored to be involved in the audit of 2020 election ballots in Maricopa County. 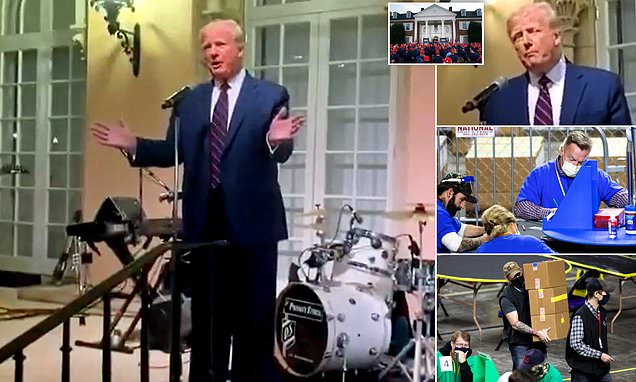