Have you ever wondered how the Avengers would look like if they were cast in the 1990s? There is no iota of doubt that the faces that play our favorite Marvel superheroes are irreplaceable and no one could have done the job better than they have.However, what if MCU was created in the ‘90s? Based on fan demand and the actors’ on and off-screen personality, we have reimagined some icons of the ‘90s as the Avengers.Here is a list of Hollywood actors from the ‘90s who would fit in the MCU cast.1.Doctor Strange

Given Keanu Reeves’ fame back in the ‘90s with films like The Matrix and Speed, he would have definitely been cast as Doctor Strange.

His calm and composed style of dealing with the crisis would have blended well with the Sorcerer Supreme’s personality.However, Keanu’s case is slightly different from other actors on this list, since he still retains his youthful face and is more popular than ever.Frankly speaking, we are still waiting for him to join the MCU family.

Did you see Uma Thurman’s action stunts in Kill Bill? She played an assassin and her character was titled as the “deadliest woman in the world”.Would have been awesome to see her don the Black Widow suit and kick some asses.3.Star-Lord Actors Would Fit in MCU Cast

Most of the sites and fans have found the ‘90s hero Brendan Fraser as the face for the cheeky Peter Quill.Hollywood may have forgotten the actor today but back in his days, fans wouldn’t dare to miss any of his movies.

The Mummy star has entertained us with his heroic charms, adventurous attitude, and swag that tick the boxes for Star-Lord as well.4.Spider-Man

Did you know that Leonardo DiCaprio was offered to play Spider-Man by Sony but he refused to take a Superhero role? Sony’s taste is impeccable as Leonardo could easily depict the active and genius young boy.5.Ant-Man

The competition to play the likable and hilarious Ant-Man runs between David Schwimmer and, well, Paul Rudd.Paul Rudd was a known personality even back then who was admired for the same charm and humor.However, considering his youthful face looks even at this age, he would have looked way too young back then.

The best contender for the role would have been David Schwimmer who is best known as Ross from Friends.He is a master of putting himself in an awkward situation and killing us with his humor.6.

The Wasp who is played by Evangeline Lilly depicts a bold and witty woman who has a heart but can also kick your butt.She is someone who would never let her emotions cloud her judgment and decisions.We can’t think of anyone else but the ‘90s fit actress Sandra Bullock who would have understood the strong-headed character so well.7.

Sharon Stone was a diva of her time who could grab the screen attention with her powerful presence.She could play out Pepper Potts in a smart and charming manner.

Sharon had also displayed action skills in Total Recall which would have come handy in the MCU.8.Iron Man

Though Robert Downey Jr.is the ultimate Iron Man for the similarities he shares with the character, casting him in the ‘90s wouldn’t have him possible due to his lifestyle back then.The only alternative would have been the action star Tom Cruise.

He could have easily played the young and rich brat.

Chadwick Boseman Forever! We are still processing through the actor’s loss who had brought life to Black Panther.We are yet not ready to accept any new face who could replace the T’Challa.However, if we go back to the ‘90s, the actor we find the best fit for the role would be Denzel Washington.

Denzel Washington has 2 Academy Awards under his belt and no one else could display the strong screen presence as good as Denzel.10.

Even to date whenever we look at Mantis from Guardians of the Galaxy, most of us are reminded of Winona Ryder.Ryder is a critically acclaimed actress who is best known to the current generation as Joyce Byers from Stranger Things and Rachel Green’s girl pal from Friends.But she was at the top of her career in the ‘90s with Edward Scissorhands and Little Women.

Her cute and petite appearance would have been convincing as Mantis.Though quirky for her solitude for most of her life, Mantis is a significant member of the team who sided with the Guardians while taking down Ego and helped the Avengers in slowing down Thanos.

To play the self-restraining, witty, and genius Bruce Banner isn’t everyone’s cup of tea.Mark Ruffalo did an excellent job of bringing life to the comic book character.

But in the ‘90s, perfect casting would have been David Duchovny.12.Thor

It goes without saying that Brad Pitt would have been the ultimate God of Thunder in the MCU in the ‘90s.Apart from his face that resembles that of Thor, Brad’s Fight Club physique, cheeky attitude, and passion towards action would have made a perfect Thor.13.Falcon

Eddie Murphy is best recognized for his performance in The Nutty Professor and Beverly Hills Cop.Though he was best at comedy-action, we can totally picture him as the cool Falcon who can be serious and light-hearted depending on the situation.

Johnny Depp has successfully blended in every role he has played over the years.His experience in comedy and action would have given him an edge over others to play the passionate and intelligent Hawkeye.He was any way the top actor of the ‘90s and would have been definitely been approached by the MCU . 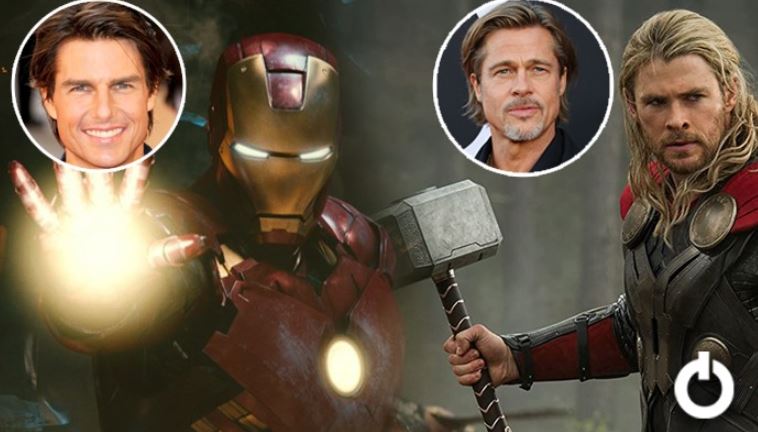